VIDEO
Street View
Back To Tour 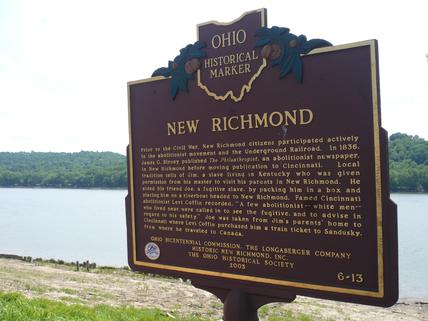 In 1862 slave catchers paraded a captured LeRoy Lee in manacles down Front Street toward the ferry.  Lee was caught in Cincinnati and was being returned to his owner John Anderson in Carthage, Kentucky.   A crowd of New Richmond citizens confronted the armed captors demanding the release of Lee.  Seeing they were greatly outnumbered and out gunned, the slave catchers relented.  Lee became the second former slave of John Anderson along with Henry Poindexter to publicly gain his freedom with the assistance of citizens of New Richmond.   LeRoy Lee later enlisted in the Union army.  After the war, he returned to New Richmond and eventually settled in Fort Wayne, Indiana. The New Richmond Waterfront is recognized by the National Park Service as a National Underground Railroad Network to Freedom site.